These days there is a word that you will hear everywhere. This is true especially if you watch the certain cooking and food focused television networks or go to a higher end restaurant where the chef is trying to be pretentious. That word is “Umami.” It is usually followed by the words “Miso” and “Soy.” The combination of the words looks something like “A delicious Miso-Soy broth to really highlight the Umami flavors of the dish.” What these words actually mean is that they have used Miso soup base and soy sauce to build the savory flavor. By using these words, they trick you into thinking and believing that this is some kind of magical Asian fusion that only master chef’s can make. But all they have done is add a form of MSG to their food.

Umami is The Secret to Great Flavor

The secret here is that 99% of people who cook professionally do not understand the relationship of the 5 flavors and how they work to build flavor. They simply repeat cooking techniques that they learned at other jobs or techniques that they learned from other chefs. Then, they simply repeat them. This lack of understanding leads to a lot of confusion and misinformation that has been disseminated over the years, whether maliciously or unintentionally. This misunderstanding is very specifically about the concept of savory or as the Japanese call it, Umami.

What is Umami and where does it come from?

As we have previously discussed, savory or umami is a basic flavor sense that you experience on your tongue. It is the sense that tells you, “this food is full of nutrition.” It is most typically associated with the presence of proteins and amino acids. This is why the easiest example of a savory item is a grilled steak.

When chefs use miso, soy sauce, or MSG, what they are doing is adding that savory flavor without having to add extra ingredients like beef, mushrooms, red wine, seaweed, or tomatoes. The most simplified form of the concept of savory is in a seasoning called MSG. MSG is one sodium ion attached to a very savory and naturally occurring amino acid called “glutamic acid.”

There is a lot of controversy surrounding MSG and whether it is good for you, bad for you, or neutral. I would like to clarify exactly what it is, how it is made, and the honest truth behind it. I would like to state that I personally use MSG and see no problems cooking with it whatsoever.

From the USDA: “…MSG is the sodium salt of glutamic acid. Glutamic acid is an amino acid, one of the building blocks of protein. It is found in virtually all food and, in abundance, in food that is high in protein, including meat, poultry, cheeses, and fish.”

What MSG does is provide a chemical called glutamate to your tongue. Glutamate is a naturally occurring organic chemical that tells your brain, “This is savory, rich, and delicious.” Glutamate occurs naturally in all foods we eat and cook with, except for ones that are not derived from plants, animals, or fungi.

Examples of foods with highly concentrated deposits of glutamate are:

The History of MSG

MSG was discovered by Japanese researcher Kikunae Ikeda in 1908 by creating a crystalline extract of glutamic acid from seaweed. He discovered this while eating miso soup and wondered why a soup with absolutely no meat in it was so savory.

For your reference, miso soup is a vegetarian soup broth made with kelp, which is a type of seaweed, and a fermented soy bean paste called miso. He then experimented with the kelp until he could extract a concentrated and dry version of that savory flavor. Today, we know this extract as MSG.

Sometime in the 1920s, Dr. D.Y. Chow, from the National Dyes Company of Hong Kong, developed the process for extracting MSG from wheat. This is how it is still produced today. (Reference: The Wok, by Gary Lee, Nitty Gritty Cookbooks) The main problem with MSG is that people use too much in their cooking, because quite frankly it makes everything instantly delicious!

How is MSG Activated?

MSG by itself has very little flavor aside from the instant savory feeling in your mouth. But when MSG is applied with salt, it becomes a flavor explosion! The problem here as you can see, is you end up saturating your food with sodium. Sodium can be disastrous for someone with heart disease or high blood pressure. So when I cook and intend to use MSG in addition to salt, I reduce the amount of salt to allow for the extra sodium contained in the MSG.

If you remember back to what we learned about the five flavors, this makes complete sense. Salty flavors amplify the other flavors, and savory flavors are activated in the presence of salt.

The most ground breaking part of MSG is that you can make entirely meatless broths that taste amazing. IE: hot and sour soup, egg drop soup, miso soup, vegetarian vegetable soup, etc. This is especially helpful for vegetarians and vegans who are having trouble making their food taste great.

How is MSG Sold?

MSG is typically marketed as “Essence of Umami,” “Umami Extract,” “Umami Seasoning,” or some variation on the word “Umami.” Umami is the Japanese word for savory. It is the concept of deliciousness, as the researchers who discovered the sense of savory on your tongue were Japanese. While miso, soy sauce, and MSG are savory in taste and can bolster savory flavors, please remember that savory, aka Umami, is not a food product. It is a basic flavor sense found on your tongue.

Umami = the flavor sense on your tongue

The MSG Scare is Alive and Well

If you would like some evidence that the MSG scare is still alive and well in people’s consciousness, simply go to your local grocery store. You will readily find packages and signs proudly proclaiming “NO ADDED MSG.” They say NO “ADDED” MSG because glutamic acid is a naturally occurring substance found in almost all food. I am not trying to convince you to put MSG into all of your food. I am simply suggesting it as a convenient seasoning to make your food taste great.

Still scared of MSG? You can absolutely go the long way around. You can add some of the other examples I’ve listed to make your food more savory. (anchovies, mushrooms, bay leaves, soy sauce, parmesan cheese, tomatoes, etc.) But, it will take longer, generally cost more, and will require more product weight to make the same flavor.

I can make sauce, gravy, and other dishes incredibly savory, decadent, and delicious without the addition of glutamate extract. Just don’t live in fear of MSG because of ill informed and fear based health food movements that have no idea what they are talking about. I personally think it is preposterous whenever I see the words “miso soy broth” and now you will too. Because what they are really trying to say is “MSG broth.”

Trust me on this one. Buy MSG from your local Asian market. It will be much cheaper than any other store. For more great reading on Mono Sodium Glutamate, I recommend reading “It’s the Umami, Stupid. Why the Truth About MSG is So Easy to Swallow” by Natasha Geiling, featured in Smithsonian Magazine’s website November 8th, 2013.

On To Cleaning vs Sanitizing

Buy Cooking for Chemo …and After! 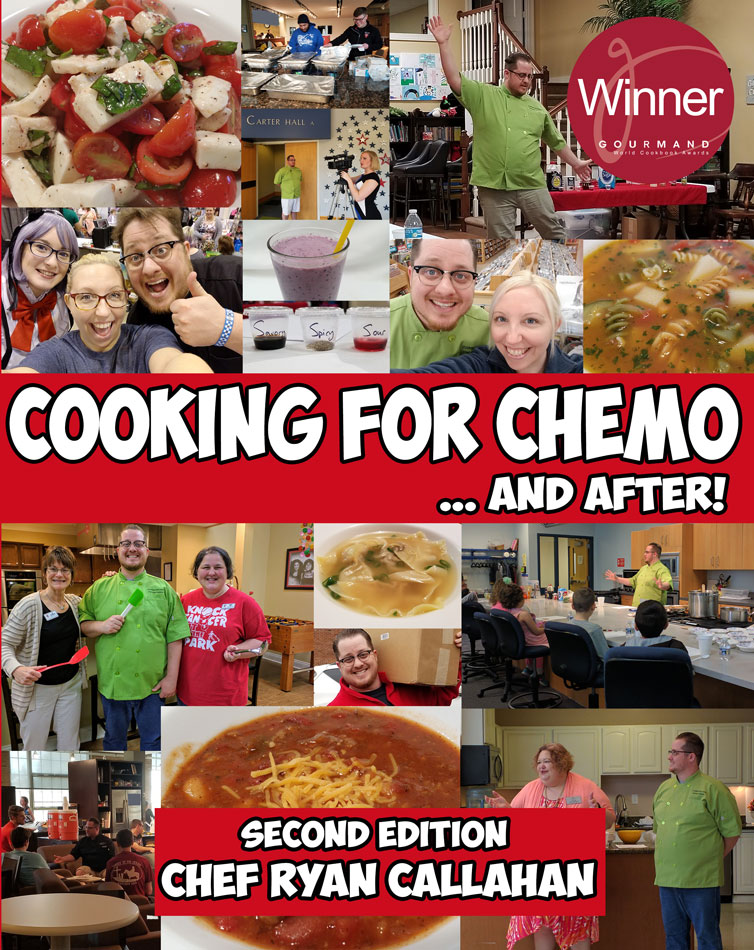 Grab a Copy of Cooking for Chemo ...and After! Second Edition!